Start the year as you wish to continue - with a tradition.

And on the first walk in town we see this - a Lambretta from an earlier era.

A walk in the gorge where we rescued a bleating kid.

And in the sun, waiting for guests - lentils, yumm!

And the dogs have a belting good sing.

We walk around the town and find the memorial to the Australian forces who fell in 1941.

The light from this moon on Crete is very strong, even in the morning.

The weather changes and we get winds, turning the sea into a mix of foreboding (almost) black to turquoise and scorching white.

And the waves make "pools" on the beach.

Even in January things grow on this island.

And we go to the vet for a jab and some pills, but Miloš gets a bit more than he bargained for.

We have Greek coffee (yumm) in a crowded, US-branded locale for no money - we were treated with cake too.

And the night isn't bad either, before the waning Gibbous moon. Hi Polaris.

Ancient Greek serenades fill every corner of the city of Rethymnon on the 17-FEB.

The Rimondi Fountain at night.

And then, off to the Eastern part of the island over the main road towards Heraklion and then through olive groves getting higher and higher in the Lasithi Plateau then down to Ierapetra for a coffee. We drive on past Makrygialos as it get dark up into the hills as the clouds descend. Narrow, windy road to Zakos for supper and a quiet night off the main drag.

The next morning through the hills to Vai and Itanos, both quiet beaches. On to Sitia and then the main road high in the hills to Agios Nikolaos before a meal in Elunda, by the port.

And the view from across the bay, windmills and all.

We pack up and drive to Heraklion and wait for the ferry for an overnight trip without little sleep.

Piraeus is still dark when we arrive and so is Athens. We take the E75 motorway all the way to Thermopyles - where 300 Spartans held off a huge Persian army, until they were betrayed and cut to pieces.

There is a memorial to this event.

The field all around is steaming.

So, I take a dip in the water and come out smelling - of bad eggs.

Then off on the back roads to Meteora.

We check into the campsite and then take a look at the stunning geology with buildings perched on top. I was told some religious figure insisted churches and other buildings had to be built on the top of the local communities. Seems to me this makes it hard on the general population - they could better have had built hospitals and schools.

And then via a delightful valley back down to Igoumenitsa to book a ferry to Bari.

A final night on the beach.

Before the ferry leaves.

Then a long, long drive all the way back to Classe (just South of Ravenna) to take another look at Augustus Caesar and the Cattle - still capable of scaring Miloš.

Then up along the coast to Venezia. With an unexpected ferry on the way.

Finally arriving at the campsite.

Son Barney turns up to spend time - what a most enjoyable time this was too. And the weather is fine for us to cruise down the canal.

To the Peggy Guggenheim, which after the main gallery was refreshing.

We also tried to get into the Arsenal - no chance.

A trip to Murano and Burano - nice!

And after a few days we drive around to the spit of land pointing down to the Lido.

And then on, in a flurry of fog to Treviso, Vincenza for lunch, Verona to Garda and the campsite.

Good walks along the shoreline in the early morning - not a soul about.

Then we are off again to visit a friend who has an apartment not far from the lake. Nice!

The following day it is back to

Zurich through the St. Bernadino tunnel - with snow, but Maria seems not to mind.

Friends are on the list of things to do as well as the usual "service" activities, teeth, eyes, etc.

Maria is then put up for sale. Hopefully this is the right time of year we put her into the hands of a (hopefully competent) dealer. The following week Miloš gets his worm treatment on a Monday morning, together with a stamnp in his passport and we head off northwards on the same day in the TGV.

We arrive in Paris as the afternoon is beginning after a very rapid ride directly from Zurich. My goodness how the train flies. As we go over the brow of a hill it feels as if the whole caboodle is about to lift off.

After a quiet night in an Ibis hotel near the Seine we head off to Gare Du Nord for a coffee and a surprise.

We get tickets for Calais and attempt to board the first leg - on a TGV. The attendants say it is not possible to take a dog on board, especially if we don't have a muzzle. After some discussion and mentioning the fact that we were on a TGV the previous day we are allowed to step inside - way at the back, but what the helll, we are rushing towards the coast.

At Calais we take a taxi to the passengar terminal where we are told foot passengers are not allowed to take dogs. Ahem - makes no sense to me. What are the alternatives I ask politely, though not feeling at all polite. "Well you can hire a car over there, but it has to be brought back here, or you can ask someone with a car if they will take you." We do the later for a hile and a man in a beemer says maybe, then goes to buy his ticket, after which he says yes, but your documents need to be checked.

This we do, and the lady from the ferry line says there is a problem. The de-worming stamp is not on the de-worming page and the UK customs will not accept it. WHat to do? She says "Go to the vet in Calais and buy a new passport and they will transfer the de-worming stamp." Because the stamp has to be older than 24 hours (which is why we arranged it the previous day and stayed overnight in Paris) and less than 5 days old when you board the ferry.

So, back to town for a new passport and cash - we have run out by this time. Then back to the ferry terminal. After a while we meet a young girl who steps out of a German van. I ask here if we could travel with them and she says "I will have to aks my dad, but I'm sure it should be OK." and it is.

This is the only country in EUrope which seems to give a rats about animal imports, all the rest are very relaxed about it, not having looked at the passport even once. I wonder how the elite manage with their racehorses. Anyway the insistence on de-worming seems to me to be crazy, but it keeps the French vets in work - they must laugh all the way to the bank.

Phew - a great sign of relief when we board the ferry and have a long chat with this nice man and his daughter. I give them a few tips on what to see on the south coast of England.

So, after a long train journey we get to stay with friends in London - thanks so much for this, finding a place to stay in the capital is a nightmare.

The following day we are off to Devon and an extended stay with my sister and her man.

The days go by quite swiftly, we go to the coast, and area I used to visit with a very young family on several occasions.

And then there is the steam railway at Painton.

Miloš in the evening sun on the River Dart at Totnes

The Severn Stars in the morning sunlight.

And this morning (15-MAY) a hot-air baloon nearly wets the feet of its passemgers before it soars away over the very green hills.

The hedgerows are full of my favourite wild flower - the Red Campion. It reminds me of hot Summer days walking in the tiny, enclosed roads as a Boy Scout.

And e trip to Dorchester for Hardy's Monument on the return journey.

Of course I have to take the road up from Abbotsbury witha view back down Chesil Beach.

On the 6-Jun - 70 years after the D-Day landings I ordered the next van. Need a name. 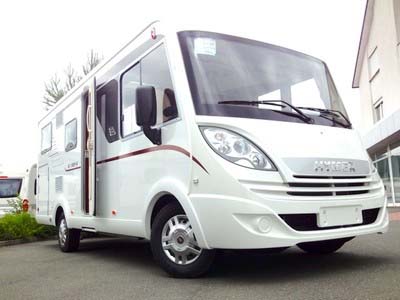 A view of my favourite location - Start Point - from Slapton Sands.

And the ballon returns and the pilot does his party trick.

And the bike gets ordered from a small shop in Plymouth.

And Miloš plays silly buggers with a young pup.

When the sun comesout, so too do the tourists. Here they are queuing to board the riverboat to Dartmouth.

And there is even a rowing regatta.

One evening the local Brass Band is holding a free concert on Steamer Quay.

And a couple of Nights on The Moor (sans Miloš) at the hotel where a certain Ms Christie wrote her first novel - in 2 weeks.

Not too far from Haytor.

And then to Plymout to receive the new, folding bike for shopping when on a remote campsite:

With a view of the Lido - screaming kids having loads of fun.

I had forgotten how long the hills can be in Devon - Phew, quite a ride back to Totnes

Then there was this gem - it never went faster than it needed to - 44 miles an hour. Made famous in a song by Flanders and Swan.

Off to Bath for few days to stay with friends.

And a walk along the canal.

And Miloš Karoly is 11 years old today the 3-SEP.

The ballon appears over the Dart river again.

And the pier at Paignton.

We also take the paddle steamer down the river to see where Agatha Christie wrote overlooking the river.

And someone with considerable resources has built a huge house on the river underneath a viaduct built by Isambard Kingdom Brunel.

And then we get a very high tide based on the supermoon.

And then 800 swimmers turn up on 14-SEP to swim from Totnes to Dittisham. Wave 1 - the beginners.

Then the mediums, which was followed by the elite, supposed to take less than 3 hours. Far too cold for me.

And a windsock, measuring the hot air eminating from the palace of Westminster.

Go, Scotland go. You will do so much better as an independent country.

And, needless to say the Scots didn't get what I think they deserve, they got "business as usual" from a government which takes no heed of the needs of the people. Nuff said.

I leave Miloš behind and fly from Bristol Airport

to travel back to:

Where I get to stay with a very good friend.

With a trip to the Uetliberg where the weather is less than warm.

And a view of what I consider to be a seriously silly "art" project.

But then past the Swans who seem not to have heard of Tchaikovsky, at least not so far today.

But then it is 22-SEP and officially car-free day, so the city allows a bunch (well quite a big group) of cyclists to dawdle around the streets ringing their bells and listening to pop songs being blasted from high-powered speakers.